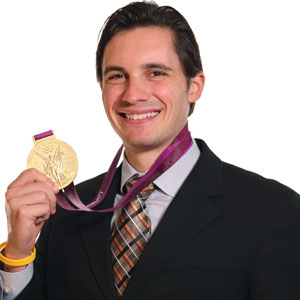 Inspirational 2012 Gold Medal Olympian and Cancer Survivor
Fee Range $10,001 - $20,000 *
* This specific fee falls within this range. Ranges are presented as a guideline only. Speaker fees are subject to change without notice. For an exact quote, please contact your Keppler Speakers representative.
Add to Favorites
Shanteau http://ericshanteau.com/

Eric Shanteau shares his secrets to achieving and maintaining a winning mindset, triumphing over obstacles, adapting to change and achieving your goals.

With his lifelong ambition of becoming an Olympic swimmer at his fingertips, Eric’s testicular cancer diagnosis just weeks before the 2008 Olympic swimming trials presented him with one of the most difficult decisions of his life. Deciding to postpone treatment, he qualified and competed in that summer’s games before undergoing surgery to remove the tumor. Four years later, he made his triumphant return to the water at the London Summer Games and earned a gold medal as part of the 4x100 medley relay team.

While taking you inside the life of an elite athlete, Eric candidly conveys the overwhelming shock he felt upon learning the diagnosis. As he describes the mental training that helped him accept his situation and persevere, Eric offers guidance for adopting a positive attitude that audiences can apply to their own challenges in life.

With an emphasis on learning from failure and visualizing the success you want, Eric's inspiring narrative inspires you to see the silver linings in difficult circumstances, remain committed to achieving your dreams and to just keep swimming. That positive attitude has assisted Eric in moving on to a successful sales career, while at the same time defeating cancer for a second time 2017.