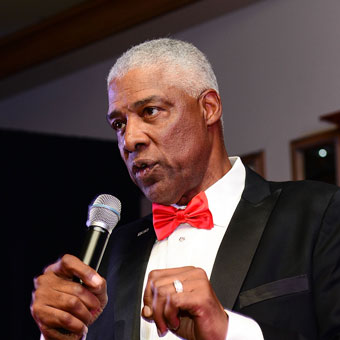 Known as one of the greatest NBA players of all time—and the man who popularized the “slam” dunk—Julius Erving shares what he learned from 16 seasons of pro ball, and 30 years of post-basketball life.

Widely considered one of the greatest athletes of the 20th century, Julius Winfield Erving, known by the nickname, “Dr. J,” helped launch a modern style of play that emphasizes leaping and playing above the rim. His innovative style of play, including his signature “slam” dunk, is now a basic skill set of the modern game. Erving helped legitimize the now-defunct American Basketball Association (ABA). Much as players are considered “the team,” “Dr. J” was considered “the league.” He was the most well-known player when the ABA merged with the National Basketball Association (NBA) after the 1976 season.

Erving won three championships, four Most Valuable Player Awards and three scoring titles while playing with the ABA’s Virginia Squires, the New York Nets (now the Brooklyn Nets), and the Philadelphia 76ers. He was selected as a member of the NBA’s 50th Anniversary All-Time team and in 1993 was inducted into the Basketball Hall of Fame. Gracious, dignified and disciplined, Erving was an ideal ambassador for the game.

An American legend, “Dr. J” reveals personal tactics for overcoming challenges and cultivating a champion’s mindset. In the presence of a living legend, participants walk away enlightened to a deeper understanding of the power of grace, humility and hard work.

He is the New York Times best-selling author of Dr. J: The Autobiography. Since his retirement, Erving remains actively involved with the Philadelphia 76ers, representing the team in a formal capacity; he also participates as a coach for the BIG3 professional 3-on-3 league.

Mr. Erving was a lovely guest, a gentleman, and a very interesting speaker. Our group was very pleased!