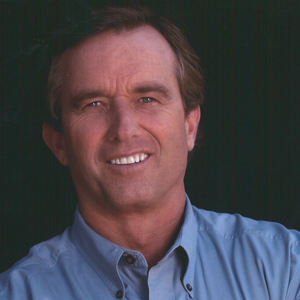 An agent of change among environmental activists, Robert F. Kennedy Jr. shares with you a bold vision for America’s future, in which energy independence and sustainable technology revitalize the nation’s economy.

As president of the board for the Waterkeeper Alliance, Kennedy continues to lead the fight against those that pollute the nation’s waterways. Kennedy cemented his reputation as a high-profile activist with the publication of Crimes Against Nature, which called into question the country’s environmental policies. He has also been involved with numerous cleantech corporate and venture capital groups. Kennedy’s book American Values: What I Learned From My Family shares memories of growing up in one of America's most influential families and explores how family has shaped his values.

During his presentations, it’s easy to see why Kennedy was named one of Rolling Stone magazine’s “100 Agents of Change.” His expertise is evident and his passion palpable, as he outlines the steps we can take to reduce the national debt and increase U.S. economic competitiveness by investing in the development of sustainable technologies.

With captivating oratory talents and a clear and achievable vision, Kennedy adeptly convinces audiences that it is truly possible to protect the planet and make the world a better place for future generations.

[Robert F. Kennedy, Jr. was] a huge success. He was electrifying. He held [the audience] utterly spellbound...[and] finished with an optimistic and inspiring message. Bradley University