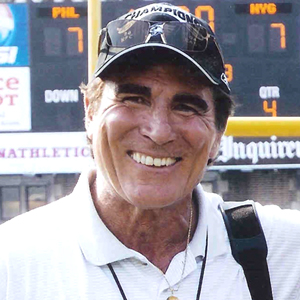 Former Philadelphia Eagles Walk-On Legend
Fee Range $20,001 - $30,000 *
* This specific fee falls within this range. Ranges are presented as a guideline only. Speaker fees are subject to change without notice. For an exact quote, please contact your Keppler Speakers representative.
Add to Favorites
http://www.vincepapale.com

In 1976, Vince Papale was working as a schoolteacher and a part-time bartender. Philadelphia Eagles' then-rookie head coach Dick Vermeil held a press conference and invited locals, including Papale, who was a former track star, to a workout.

The rest is history. Papale showed up at the workout and ran a 4.5 40-yard dash, a world-class time! Coach Vermeil offered him a contract on the spot, but this 30-year-old walk-on still had to make the team. Overcoming tremendous odds to become the oldest rookie in the history of the NFL, Papale eventually became a team captain and played in the NFL for four years. Not only that, but he was voted Man of the Year by the Eagles in 1978, for his many charitable activities and honored by the NFL. His "never-say-die" attitude became the inspiration for turning the Eagles into a Super Bowl team. A unique path to the top has helped make Papale a unique and engaging sports speaker.

Vince Papale's inspirational journey from humble working-class beginnings and troubled home life to successful professional athlete and businessman is a story that appeals to audiences from all walks of life. His story is the subject of a book and a major motion picture from Disney titled "Invincible". The hit film was released in August 2006, starring Mark Wahlberg as Papale and Greg Kinnear as Eagles coach Dick Vermeil. His new book, "Be Invincible in Changing Times: A Playbook for Winning No Matter What Life Throws at You" includes Papale's own story as well as others about people who battled adversity and won.

A survivor of colorectal cancer, Vince was the 2007 recipient of the Lombardi Symbol of Caring Award for making extraordinary strides in encouraging cancer research, prevention and treatment through awareness and philanthropy. He continues to be a highly sought speaker on issues concerning cancer awareness and prevention.