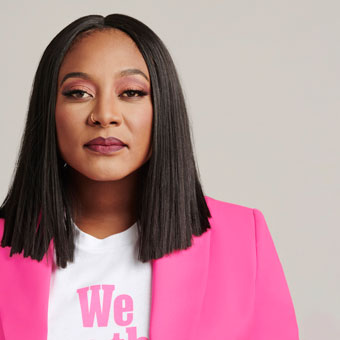 Currently, as the Strategy & Partnerships Director for the National Domestic Workers Alliance, Alicia works to build power, placing domestic workers at the forefront of the movement we need to change the domestic work industry and to build an economy that places people over profits. With Opal Tometi and Patrisse Cullors, Alicia created the Black Lives Matter Global Network, with 40 chapters in 4 countries, to change the ways in which Black people are stripped of our humanity.

Alicia's writing and work has been featured in Time, Mic, Marie Claire, The Guardian, Elle.com, Essence Magazine, and The New York Times. She has received numerous awards and honors, including the 2017 Sydney Peace Prize with Black Lives Matter co-founders Patrisse Cullors and Opal Tometi; Fortune Magazine 2016 World’s Greatest Leaders; and she was a member of the 2016 Tribunal of the US Black Women’s Truth and Reconciliation Commission held at the United Nations. Alicia was named a Fast Company 2017 Most Creative People in Business, The Root’s 2016 and 2015 list of 100 African American Achievers and Influencers, and the POLITICO 50 Guide to thinkers, doers, and visionaries transforming American politics in 2016. Alicia received the 2016 Glamour Women of the Year Award, the 2016 Marie Claire New Guard Award, and named a Community Change Agent at the 2016 BET Black Girls Rock Awards. Her book, The Purpose of Power: How We Come Together When We Fall Apart is set for release in October, 2020.