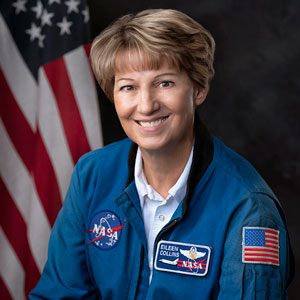 NASA astronaut Eileen Collins reveals encouraging perspective and insight on the leadership skills needed to break barriers and become a successful pioneer in your field.

One of America’s most admired women, Col. Collins became the first female to pilot a U.S. spacecraft with the Discovery shuttle flight in 1995, and the first female commander on the 1999 Columbia shuttle flight. In 2005, NASA tapped Col. Collins to command the space shuttle Discovery’s historic “Return to Flight” mission, NASA’s first manned flight following the loss of space shuttle Columbia in 2003.

While logging 872 hours in space, Col. Collins earned a reputation for coolness under pressure. With that same calm demeanor, she shares how her career as an astronaut took shape, from her early years in the U.S. Air Force to her ground-breaking experience with NASA. Her memoir, Through the Glass Ceiling to the Stars, was published in 2021. In 2022, Col. Collins was awarded the National Aeronautic Association’s Wright Brothers Award for her inspirational career as an astronaut, teacher and leader.

Drawing from her career experiences, Eileen reveals valuable insights learned from both her successes and her failures. From the importance of working with others to achieve lofty goals, to successful leadership in dynamic environments, her perspective inspires you to embark on your own original journey. For audiences interested in space exploration, she can also provide insight into the future of space travel as the world turns to exciting new space frontiers.