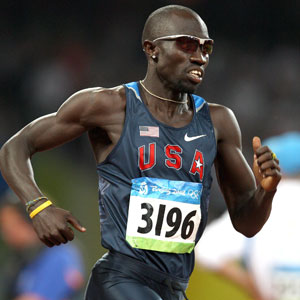 Olympic track and field athlete and one of the Lost Boys of Sudan
Fee Range $10,001 - $20,000 *
* This specific fee falls within this range. Ranges are presented as a guideline only. Speaker fees are subject to change without notice. For an exact quote, please contact your Keppler Speakers representative.
Add to Favorites
lopezlomong http://www.lopezlomong.com/

Lopez Lomong's remarkable journey from Sudanese Civil War to the Olympic Games underscores the capacity of the human spirit to overcome extraordinary adversity, giving hope and inspiration to pursue dreams that might seem unthinkable.

Lopez began his journey in Sudan, where he was kidnapped by rebel soldiers at just six years old. After boldly escaping capture, he spent 10 years as a refugee until he was adopted by a U.S. family at 16. As Lopez acclimated to American life, his long runs through city streets quickly demonstrated his extraordinary athleticism.

Upon becoming an American citizen, Lopez earned a spot on the U.S. Olympic track & field team and competed in Beijing in 2008, where he was honored as the team's flagbearer and in London in 2012. He continues to train while working on behalf of the Lopez Lomong foundation, which he founded to improve the lives of those affected by the Sudanese Civil War.

At the heart of Lopez's presentations is a palpable and inspiring faith in the American spirit. As he shares his remarkable story of extreme hardship, survival and success, Lopez motivates audiences to pursue their dreams with hope, diligence and perseverance.

Everything was fantastic. Thank you. Enjoyed Lopez immensely, his message was inspiring, and our clients and community are still talking about him! Wymer Brownlee