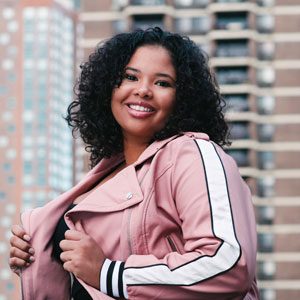 Miss Native American USA 2017/2018, Activist, Model
Fee Range $10,000 and Below *
* This specific fee falls within this range. Ranges are presented as a guideline only. Speaker fees are subject to change without notice. For an exact quote, please contact your Keppler Speakers representative.
Add to Favorites

Autumn Rose Miskweminanocsqua (Raspberry Star Woman) Williams was born and raised on the Shinnecock Reservation in Southampton, New York. She graduated from Virginia Commonwealth University with a Bachelor of Science in Mass Communications and a Minor in Business. Being immersed in her culture from birth has given her pride in her Black and Indigenous heritage that is the foundation for the work she does today.

When Williams was crowned Miss Teen Shinnecock at the age of 16, it allowed her the opportunity to travel across the United States and learn about the indigenous experience outside of her Shinnecock community. Following college, she was crowned Miss Native American USA 2017/2018 and began yet another journey to learn more about her people. Being Miss Teen Shinnecock, attending college, and being Miss Native American USA were important growing periods of her life that allowed here to learn about the world and people around her as well as look within. After completing her reign as Miss Native American USA, Williams was signed to STATE Management as a plus size model. Plus size modeling is a way Autumn Rose faces her body image issues head-on and continues her message of self-love and empowerment!

​Williams most recently worked for the federal government to help champion indigenous issues related to communities within the lower 48, Alaska, and across the Pacific Region, including Hawaii, American Sāmoa, Guam and the Northern Mariana Islands. Autumn Rose loves being able to service the vast range of Native American communities through her work at the Administration for Native Americans. Williams spreads light, love, knowledge, and positivity through the work she does. She continues to educate and bring awareness to the topics that are dear to her, such as Afro-Indigenous culture, social justice awareness, and mental health.