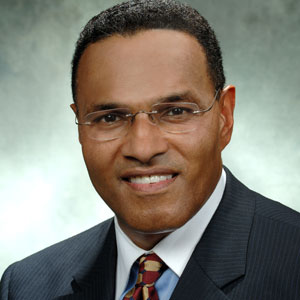 Freeman A. Hrabowski, III -- a charismatic leader who was jailed for almost a week as a 12-year-old in the fight for civil rights in the early-'60s Alabama -- has spent two decades as the president of the University of Maryland, Baltimore County (UMBC) striving to channel minorities toward grad school. His research and publications focus on science and math education with special emphasis on minority participation and performance. He chaired the National Academies' committee that produced the recent report "Expanding Underrepresented Minority Participation: America's Science and Technology Talent at the Crossroads". He was also recently named by President Obama to chair the newly created President's Advisory Commission on Educational Excellence for African Americans.

With philanthropist Robert Meyerhoff, Hrabowski co-founded the Meyerhoff Scholars Program in 1988; this encourages all high-achieving students to pursue advanced degrees and research careers in science and engineering. As well as promoting the advancement of underrepresented minorities in these fields. Based on the program's outcomes, Hrabowski has authored numerous articles and co-authored two books--"Beating the Odds" and "Overcoming the Odds"--which focus on parenting and high-achieving African American males and females in science.

Hrabowski has attracted national attention for UMBC campus's achievements in innovation and inclusive excellence. Time magazine named Hrabowski one of "America's 10 Best College Presidents" in 2009 and one of the "100 Most Influential People in the World" in 2012.

After three decades of transformational leadership at UMBC, President Hrabowski will retire at the end of the 2021-2022 academic year, on June 30th.