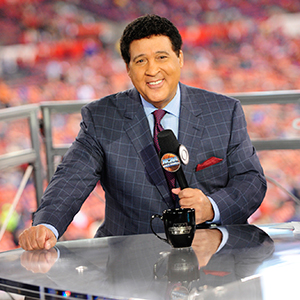 CBS Sports Broadcaster, Host of Inside the NFL
Fee Range $30,001 - $50,000 *
* This specific fee falls within this range. Ranges are presented as a guideline only. Speaker fees are subject to change without notice. For an exact quote, please contact your Keppler Speakers representative.
Add to Favorites

Greg Gumbel's standout work in the busy world of sports broadcasting has made his face, his name and his voice as familiar as any in the industry. Across almost 40 years in the business, he has become one of the most outstanding and best known announcers in sports television. In the fall, Gumbel teams with his partner, Dan Dierdorf, to call exciting NFL play-by-play action across America on CBS.

When the NFL season winds down, Gumbel switches from one premiere sports attraction to another. This year marks his 15th season as CBS' College Basketball Host for one of the most thrilling events in all of sports, the Men's NCAA Championship Tournament. During March Madness, he spends hours hosting in the studio with his colleagues, providing the latest highlights on the exciting Road to the Final Four.

As host, Gumbel has covered the NFL and college football, Major League Baseball, the Daytona 500, the World Figure Skating Championships, the 1992 Winter Olympics in Albertville, France and the 1996 Summer Olympics in Atlanta. He also served as the primetime anchor for the record-setting 1994 Olympic Winter Games from Lillehammer, Norway.

A 3-time Emmy Award winner, Gumbel received the Pat Summerall Award for his stellar work as one of sports outstanding broadcasters and for his efforts to help improve the lives of others. He has served on the National Board of Trustees for the March of Dimes and is a member of the St. Jude Children's Hospital Professional Advisory Council.

When not doing play-by-play or hosting on-air for CBS, Gumbel enjoys speaking to groups all around the country sharing his motivational thoughts, ideas and experiences from the world of sports.

Really enjoyed Greg - he was awesome from beginning to end. Institute of Internal Auditors, Philadelphia Chapter