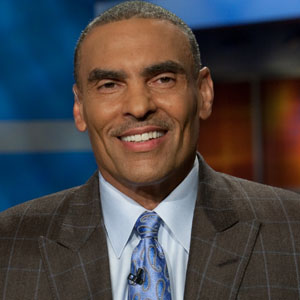 You play to win the game. It sounds like common knowledge, but Herman Edwards' life has revolved around that simple phrase. The ESPN analyst motivates listeners to discover their passions, follow their goals and never throw in the towel.

Herm’s career is defined by his energetic and enthusiastic attitude, first as an NFL player and coach, then as the head football coach at Arizona State University, and now as an NFL studio analyst for ESPN.

At ESPN, Edwards’ voice is fully integrated into the network’s platforms, from radio and digital to television. Edwards utilizes his diverse background in pro football to be one of the most informed and educated analysts on television. In 2013, Edwards was named the Team ESPN’s Commentator of the Year and joined elite company as a recipient of the Walter Camp Man of the Year Award. Edwards was also honored with the Shell Legacy Award, a recognition celebrating individuals with a legacy of charitable giving.

Edwards enjoyed a 10-year professional playing career from 1977-86, spending the first nine of those seasons with the Philadelphia Eagles. He earned second-team All-NFC honors in 1980 and played an instrumental role on a hard-hitting Philadelphia defense that helped boost the Eagles to a berth in Super Bowl XV that season.

Edwards concluded his NFL playing career in 1986 and secured his first job with the Kansas City Chiefs in ‘89 as the recipient of the club’s Minority Coaching Fellowship. Edwards was the first graduate of the fellowship to become the head coach of the franchise for which he served his fellowship.

In 2001, Edwards departed Tampa Bay to become head coach of the New York Jets. In five seasons as the Jets head coach, Edwards compiled a 39-41 record. He registered 35 victories with the Jets from ’01-’04, tying Joe Walton (’83-’86) for the most regular season wins by any coach in his initial four years with the team. Edwards also led the N.Y. Jets to the postseason in his first campaign with the squad.

Herm Edwards is a charismatic inspirational speaker who shares with his audience a special game plan which centers on the pillars of teamwork—work ethic, communication, integrity and legacy. A former NFL player, scout, assistant coach and head coach, Edwards shares stories and motivational moments from his career that resonate with any group. The lessons he has learned along the way and the impactful messages he has shared with his teams will keep any audience on the edge of their seat. Herm Edwards has a zest for life that is hard to match and is clearly evident in his dynamic presentation.

*By arrangement with Octagon Speakers Group*

Herm was amazing, he got huge accolades from our team members and was very engaging! General Electric Digital Energy