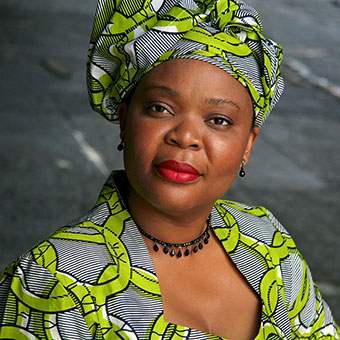 A key actor in the Liberian peace movement in the early 2000s, Leymah Gbowee has established herself as an international symbol of peaceful conflict resolution and the power of women as leaders and agents of change.

Honored with the Nobel Peace Prize for her efforts, Gbowee now travels the world speaking about the pernicious and devastating effects of war and gender-based violence, advocating for greater inclusion of women in leadership positions and promoting the importance of interfaith dialogue and community building to achieve peace.

Gbowee’s leadership of the Women of Liberia Mass Action for Peace—which brought together Christian and Muslim women in a nonviolent movement that played a pivotal role in ending Liberia's devastating 14-year civil war in 2003—is chronicled in her memoir, Mighty Be Our Powers, and in the award-winning documentary, Pray the Devil Back to Hell.

A highly sought-after speaker, Gbowee’s extraordinary ability and vision in the field of social sciences often bring her in the same speaking circles with the likes of former U.S. Secretary of State Hillary Rodham Clinton and other high-profile names. Her TED Talk has been viewed by nearly 1 million people and she has been a featured speaker at such events as the World Economic Forum in Davos, the Clinton Global Initiative Annual Meeting, and the U.S. State Department's International Women of Courage Awards.