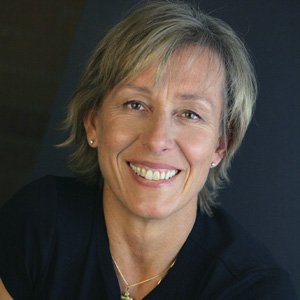 Legendary Champion Tennis Player
Fee Range Above $100,000 *
* This specific fee falls within this range. Ranges are presented as a guideline only. Speaker fees are subject to change without notice. For an exact quote, please contact your Keppler Speakers representative.
Add to Favorites

A champion on and off the court, Martina Navratilova is not only a tennis legend, but an inspirational leader and sports speaker who demonstrates wit, candor, and sheer motivation. Arguably the best tennis player ever to play the game, Navratilova has amassed an unmatched number of professional records during a career that spanned an amazing four decades, while proving herself to be one of the most intriguing, outspoken, and respected figures of the 20th century - and now the 21st century.

Martina Navratilova has won an astonishing 59 Grand Slam titles, and beyond this, a total of 167 singles titles and 179 doubles titles, all-time records for tennis players, male or female. Her staunch support of many social issues, such as women's issues, gay rights, ethical treatment of animals, environmental protection, and AIDS research, have made her a powerful keynote speaker as well.

Through her television appearances, speaking engagements, and tennis commentaries, Martina Navratilova has become as popular for her humor and forthrightness and determination. In addition, she is an accomplished writer of both fiction and non-fiction, and her most recently book, Shape Your Self, is a guide to personal fitness and healthy living.

Martina was truly an outstanding speaker who not only naturally captures the audience with her knowledge, passion, strong sense of confidence, and charming attitude, but also stays on a message, purposefully and eloquently, throughout a speech. AARP