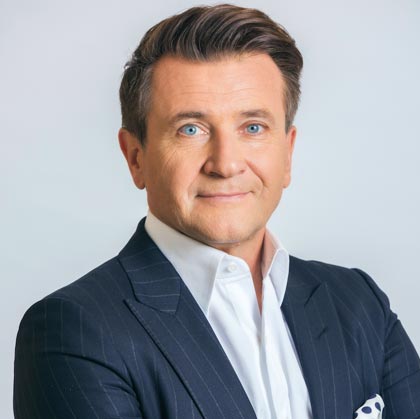 CEO & Founder of Herjavec Group, Dynamic Investor & leading Shark on ABC's "Shark Tank"
Fee Range $75,001 - $100,000 *
* This specific fee falls within this range. Ranges are presented as a guideline only. Speaker fees are subject to change without notice. For an exact quote, please contact your Keppler Speakers representative.
Add to Favorites
robertherjavec

Robert Herjavec is a dynamic entrepreneur and leading Shark on ABC’s Shark Tank.

Born in Eastern Europe, he arrived in North America on a boat with his parents after escaping communism in the former Yugoslavia. From delivering newspapers, and waiting tables, to launching a computer company from his basement, his drive to achieve has led him to the fulfillment of a better life for himself and his family.

In 2003, Robert founded Herjavec Group, and it quickly became one of North America’s fastest growing technology companies. Robert’s motivational business advice has received millions of impressions through TV, print, radio and digital media. He shares his expertise with other entrepreneurs each week as a leading Shark on ABC’s Emmy Award-winning hit show Shark Tank.