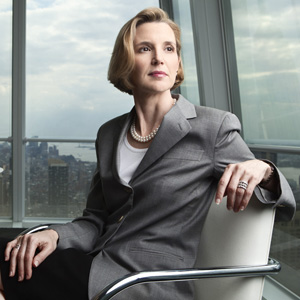 With a reputation for integrity, creativity, independence of thought, a sense of humor and an unrelenting focus on results, Sallie Krawcheck has built a career that has reached the top levels of success across a range of functions: as a senior corporate executive, as a research analyst and now as an entrepreneur. Referred to as one of the most successful and influential executives in financial services, Krawcheck has also been dubbed everything from “The Last Honest Analyst” (Fortune) to the “First Lady of Wall Street” (New York) to one of the 100 Most Creative People of 2014 (Fast Company).

A champion for women in business long before the ‘Lean In’ era, Krawcheck has often noted that “investing in women is simply smart business,” which mirrors the philosophy of Ellevate, the organization she now oversees. Ellevate network (formerly 85 Broads) is a 34,000-strong global professional woman’s network—the most expansive and diverse of its kind—dedicated to promoting economic engagement of women worldwide by providing various education and networking opportunities. Krawcheck also launched the Pax Ellevate Global Women’s Index Fund, the first fund dedicated to the highest-rated companies for advancing women.