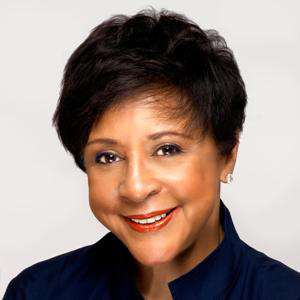 Entrepreneur and Philanthropist, Co-Founder of BET
Fee Range $20,001 - $30,000 *
* This specific fee falls within this range. Ranges are presented as a guideline only. Speaker fees are subject to change without notice. For an exact quote, please contact your Keppler Speakers representative.
Add to Favorites

Sheila Johnson is an entrepreneur and philanthropist whose accomplishments span the arenas of hospitality, sports, entertainment, the arts, education and humanitarian causes.

As CEO of Salamander Hospitality LLC, a company she founded in 2005, she oversees a growing portfolio of luxury properties including Woodlands Inn in Summerville, South Carolina, Innisbrook, a 72-hole Golf & Spa Resort in Innisbrook, Florida, and the much-anticipated Salamander Resort & Spa, currently being constructed in Middleburg, Virginia.

As a founding partner of BET (Black Entertainment Television), she pioneered modern television programming. Currently, Johnson produces films that convey a strong humanitarian message, with completed projects including "Kicking It, A Powerful Noise, She Is The Matador" and her latest film, "The Other City", about the HIV/AIDS crisis in Washington DC. In May 2011, Ms. Johnson joined the AOL Huffington Post Media Group as Strategic Advisor for Multicultural and African-American Initiatives.

In 2006, Johnson was named global ambassador for CARE, a leading aid organization fighting global poverty by empowering women. Johnson is a member of the Council on Foreign Relations and serves as Chair of the Board of Governors of Parsons - The New School for Design in New York. She is also a fervent supporter of the arts and education.