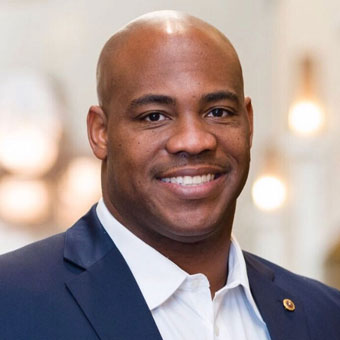 Leading authority on Socially Conscious Leadership
Fee Range $10,001 - $20,000 *
* This specific fee falls within this range. Ranges are presented as a guideline only. Speaker fees are subject to change without notice. For an exact quote, please contact your Keppler Speakers representative.
Add to Favorites
AntonJGunn https://antongunn.com/

Anton Gunn is a former senior advisor to President Barack Obama and the world's leading authority on Socially Conscious Leadership. He has a Masters degree in Social Work from the University of South Carolina and was a Resident Fellow at Harvard University. He is the bestselling author of The Presidential Principles and has been featured in TIME Magazine, Inc. Magazine, The Wall St Journal, BBC News, NPR and on Good Morning America.

As an international speaker and consultant, Gunn has worked with organizations such as Microsoft, Sodexo, KPMG, Verizon Wireless, Aetna, American College of Surgeons, FINRA, and the Boeing Company. From playing SEC football and being the first African American in history elected to the South Carolina legislature early in his career, to now working as a C-level executive for an academic health system and serving on multiple boards, he has spent his life helping people build diverse, high-performing teams and world-class leadership culture.

If you want original insights and forward-thinking action that leads to greater engagement, higher performing teams, and a better organizational culture, you want Anton Gunn.