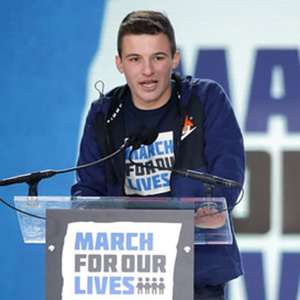 He is also the co-founder of March for Our Lives nationwide student protest in March 2018. Kasky is a survivor of the February 2018 mass shooting at Marjory Stoneman Douglas High School. He’s been featured in Time Magazine, and has appeared in dozens of talk shows, podcasts and news station throughout the U.S.