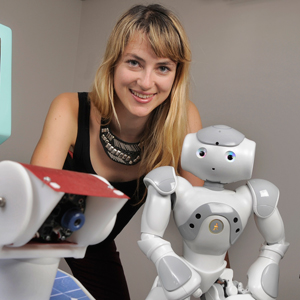 Creative Inventor, Specialist in Human-Robot Interaction
Fee Range $10,001 - $20,000 *
* This specific fee falls within this range. Ranges are presented as a guideline only. Speaker fees are subject to change without notice. For an exact quote, please contact your Keppler Speakers representative.
Add to Favorites
heatherknight

She also runs Marilyn Monrobot, a robot theatre company with comedy performances and an annual Robot Film Festival. Past honors include robot comedy on TED.com, a robot flower garden installation at the Smithsonian/Cooper-Hewitt Design Museum, and a British Video Music Award for OK GO’s “This Too Shall Pass” music video, featuring two-floor Rube Goldberg Machine. She was named AdWeek’s top 100 creatives in 2017, and Forbes List’s 30 under 30 in Science in 2011.

Her academic background includes a postdoc at Stanford University exploring minimal robots and autonomous car interfaces, a PhD in Robotics at Carnegie Mellon University exploring Expressive Motion for Low Degree of Freedom Robots, a M.S. and B.S. in Electrical Engineering & Computer Science at Massachusetts Institute of Technology, where she developed a sensate skin for robot teddy bear at the MIT Media Lab. Additional past work includes: robotics and instrumentation at NASA’s Jet Propulsion Laboratory, and sensor design at Aldebaran Robotics.