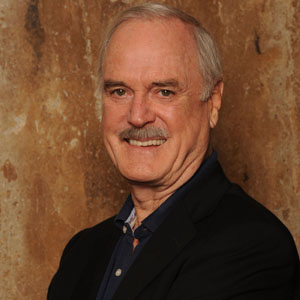 Famed Film and Television Comic Actor
Fee Range Above $100,000 *
* This specific fee falls within this range. Ranges are presented as a guideline only. Speaker fees are subject to change without notice. For an exact quote, please contact your Keppler Speakers representative.
Add to Favorites
JohnCleese http://www.thejohncleese.com/

John Cleese is both a versatile comedic actor and a leading business motivator. With the legendary "Monty Python's Flying Circus", "Fawlty Towers" and "A Fish Called Wanda", he created a unique comedic style that has inspired countless writers and comedians.

Cleese's influence is also felt in the corporate world as the founder of Video Arts, the world’s largest provider of business training programs. Cleese attributes his success at making hit training programs to his fascination with psychology and his love for teaching and making people laugh. He believes that "humor in training increases retention and decreases anxiety. When the training point is surrounded with humor, it can be readily digested, remembered and applied." On stage, Cleese brings his award-winning videos to life.

His boundless energy and inimitable sense of humor create a hilarious exploration of business basics, from corporate etiquette and customer service to creative thinking and problem solving. "The world’s funniest man" first made his mark as a member of the legendary Monty Python troupe in the 1960s, and has gone on to write, produce, direct and star in some of the greatest comedic hits of the last 40 years.

But John is far from your garden variety entertainer. From the beginning of his career he has continually parlayed his enormous talents into advancing the political causes he believes in, promoting education, and teaching business skills. In 2014, he released his "New York Times" best-selling memoir, "So Anyway…"

Whether he's coaching novice comedians, discussing his liberal politics, or imparting his formulas for success in education, business and life, Cleese enthralls packed audiences worldwide and always leaves them clamoring for more.

…a charming and delightful trip back…[Cleese has] some great stories to share. The Florida Times-Union