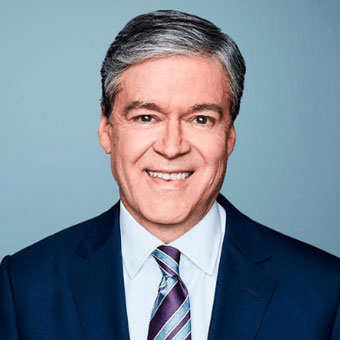 An award-winning journalist who has covered the White House and national politics for America’s most prestigious news organizations, John Harwood gives audiences his deeply respected, nonpartisan take on U.S. elections, politics and the presidency.

For more than three decades, John Harwood has been one of the most instantly recognizable faces and one of the most trusted voices in journalism, reporting for the most iconic American news media, including the Wall Street Journal, The New York Times, CNBC, CNN, PBS and NPR.

Harwood has interviewed every president from George H.W. Bush to Joe Biden and received an Emmy nomination for his hour-long, live CNBC town hall with President Barack Obama.

For the Wall Street Journal, Harwood covered the first Bush White House, President Bill Clinton’s agenda in Congress and four presidential campaigns. He was part of the Journal’s team covering the 9/11 attacks on New York and Washington, which won the Pulitzer Prize.

For the New York Times and CNBC, Harwood chronicled the financial crisis and Great Recession, including the first 2009 television interview of President Obama as he prepared to enter the White House that January. He moderated Republican presidential debates during the 2012 and 2016 campaigns.

At CNN, Harwood covered the final year of Donald Trump’s presidency and his 2020 election battle with Biden. He subsequently tracked the new chief executive’s attempt to fashion and navigate a post-Trump era.

With a rigorously nonpartisan take on the most pressing issues of the day, Harwood helps audiences understand the ups and downs of American elections and the intersection of politics and the economy at a time when the future seems particularly uncertain, the nation has never been so bitterly divided, and both journalism and democracy seem in peril.