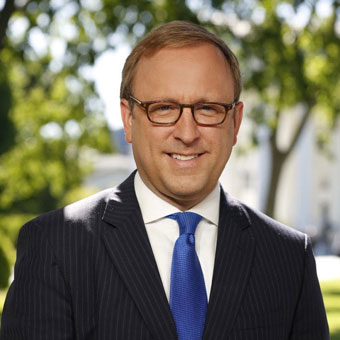 One of the most visible and trusted faces in broadcast news, Jonathan Karl is an award-winning journalist with deep experience covering U.S. politics, foreign policy, and the military.

Jonathan Karl is ABC News Chief Washington correspondent and co-anchor of This Week with George Stephanopoulos. He is author of two New York Times bestsellers: Front Row at the Trump Show (2020) and Betrayal: The Final Act of the Trump Show (2021). In 2021, Mediaite named Karl one of the top 10 “Most Influential in News Media.”

Karl’s reporting has been recognized with some of the most prestigious honors in journalism, including the Walter Cronkite Award for National Individual Achievement and the National Press Foundation’s Everett McKinley Dirksen Award, the highest honor for congressional reporting. He is also one of the few journalists to win the Radio and TV Correspondents’ Association’s top award for excellence in Washington-based reporting twice, in 2010 and 2015. He won an Emmy® Award for coverage of the 2009 Inauguration of President Barack Obama.

With behind-the-scenes-moments gathered from countless interviews with world leaders and on-the-ground coverage from Capitol Hill, the White House and the Pentagon, Jonathan illuminates what goes on in the corridors of power in the U.S. and abroad. His deep credibility, extensive news experience, and political knowledge of foreign policy, national politics, and current events help audiences understand America's ever-changing political landscape.

Jonathan was wonderful! The panel he moderated was the best one of the day and he did a fantastic job. Was knowledgeable and personable - really connected with the audience. Partnership for 21st Century Skills