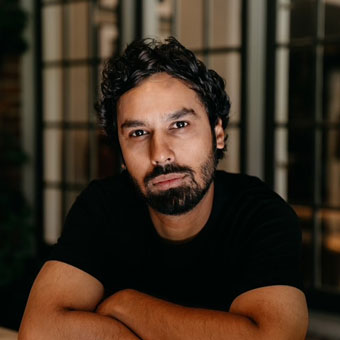 Kunal Nayyar is living proof that nerd is the new cool. It's probably no coincidence that CBS premiered its pocket-protected instant hit, "The Big Bang Theory" just months before "People" magazine dubbed 2007 "The Year of the Nerd."

A natural performer, Nayyar began acting in musicals and plays at a young age. After high school, he left India for the United States where he majored in business and took many acting classes at the University of Portland. In his senior year, he was invited to the American College Theater Festival (ACTF) to compete in an acting competition where he eventually won the Mark Twain Award for comic brilliance as well as a fellowship to the prestigious Sundance Theater Lab. He went on to receive his Masters in Fine Arts (MFA) from Temple University in Philadelphia. Nayyar is currently working on a humorous memoir recounting his journey, which is expected to be released in 2015.

While Nayyar is best known for his role as astrophysicist Raj on the CBS comedy, he's also lent his voice to animated projects including "Family Guy, "Glenn Martin DDS," and the FOX feature "Ice Age: Continental Drift." In 2013, Nayyar narrated and co-produced the documentary "Beyond all Boundaries," which takes a look at several cricket fans as the Indian team plays for the 2011 World Cup.

His energy and humor make him an ideal speaker at colleges across the country, where audiences are eager to get an inside look from the center of popular culture.