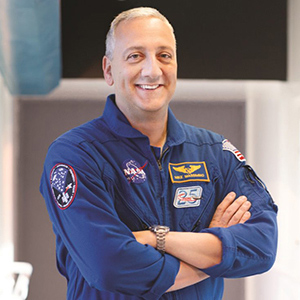 Former NASA Astronaut, Sr. Advisor for space programs for the Intrepid Museum and author of Spaceman
Fee Range $20,001 - $30,000 *
* This specific fee falls within this range. Ranges are presented as a guideline only. Speaker fees are subject to change without notice. For an exact quote, please contact your Keppler Speakers representative.
Add to Favorites
@Astro_Mike http://www.mikemassimino.com

Mike Massimino is a former NASA Astronaut, a New York Times bestselling author, a Columbia University engineering professor, and an advisor at The Intrepid Sea, Air and Space Museum.

A veteran of two space shuttle missions and four spacewalks, Mike was the first person to tweet from space, holds the team record for the most spacewalking time on a single space shuttle mission, and successfully completed the most complicated spacewalk ever attempted to repair the Hubble Space Telescope. Mike persisted through three rejections over 7 years on his way to becoming an astronaut, including overcoming a medical disqualification by training his eyes and brain to see better.

Mike had a recurring role as himself on the CBS comedy The Big Bang Theory. He is also the host for the Science Channel Series The Planets and Beyond and was featured in National Geographic Television’s One Strange Rock. Mike is also a frequent expert guest on news programs, including Good Morning America, The Today Show, CNN, Fox News Channel, MSNBC, and CNBC, and has been called the real-life astronaut who inspired George Clooney’s role in the movie Gravity.

Mike’s book, Spaceman: An Astronaut’s Unlikely Journey to Unlock the Secrets of the Universe, has received rave reviews and is a New York Times best-seller. His new book, Spaceman: The True Story of a Young Boy’s Journey to Becoming an Astronaut, was published in April of 2020.

Mike uses humor and his unique storytelling ability to inspire audiences to identify the passion in their work, to use teamwork and innovation to solve problems, to provide leadership in the face of adversity and crisis, and to never give up when pursuing a goal.

He was AMAZING!!!!!! Perfect for our group! Got a standing ovation and was awesome. Could not have gone any better.