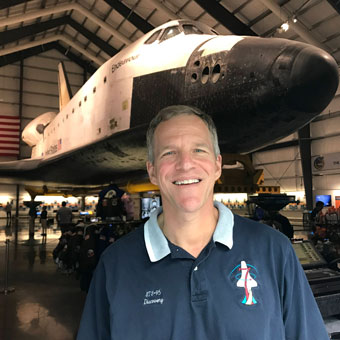 Accomplished NASA Shuttle Astronaut, Physician, Explorer, Inventor, Technology Startup Founder and CEO
Fee Range $20,001 - $30,000 *
* This specific fee falls within this range. Ranges are presented as a guideline only. Speaker fees are subject to change without notice. For an exact quote, please contact your Keppler Speakers representative.
Add to Favorites
@AstroDocScott

A graduate of Stanford University and Medical School, Dr. Parazynski trained at Harvard and in Denver in preparation for a career in emergency medicine and trauma. In 1992, he was selected to join NASA’s Astronaut Corps. Over his 17-year career as an astronaut, Scott flew five Space Shuttle missions and conducted seven spacewalks (EVAs).

With audiences, Dr. Parazynski offers important lessons on teamwork, risk management, and innovation under the most demanding circumstances, on or off the planet. In 2007, Parazynski led the EVA team on STS-120, a highly complex space station assembly flight, during which he performed four EVAs. The flight’s fourth and final EVA is regarded as one of the most challenging and dangerous ever performed. Tasked with repairing a fully energized solar array wing, Scott was positioned by a 90-foot robotic boom farther than any orbiting astronaut had ever ventured from the safety of the airlock. That coordinated effort in orbit and on the ground by Mission Control is often likened to the Space Shuttle/Space Station era’s “Apollo 13 moment.” Dr. Parazynski was inducted into the U.S. Astronaut Hall of Fame in 2016.

A life-long explorer, Dr. Parazynski is also an accomplished scuba diver, pilot, and mountaineer whose treks have taken him around the world, from the top of Mt. Everest in 2009 to the depths of one of the world’s highest lakes on top of the active Licancabur volcano. In 2016, he and a colleague set the first boot prints adjacent the world’s youngest lava lake, inside the crater of the Masaya volcano in Nicaragua.

A prolific inventor and serial entrepreneur, Dr. Parazynski also serves on the boards of several companies and is the founder and CEO of Fluidity Technologies, an award-winning technology startup focused on the development of devices that leverage machine learning to simplify 3-D motion controls for everything from drones, VR/AR applications and video games to surgical robotics.

Dr. Parazynski is the bestselling author of The Sky Below: A True Story of Summits, Space, and Speed, a memoir of a remarkable life from a storyteller who shows audiences how to apply the lessons of extreme environment exploration to leadership and to catalyzing innovative, resilient cultures and teams.