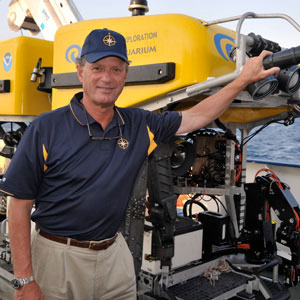 Renowned undersea explorer, archaeologist and best-selling author
Fee Range $30,001 - $50,000 *
* This specific fee falls within this range. Ranges are presented as a guideline only. Speaker fees are subject to change without notice. For an exact quote, please contact your Keppler Speakers representative.
Add to Favorites

With life experiences mirroring the adventures in his favorite childhood book, 20,000 Leagues Under the Sea, Robert Ballard is among the world's most accomplished oceanographers. A pioneer in the development of deep-sea submersibles, he has taken part in more than 140 deep-sea expeditions and is most renowned for his discovery of the RMS TITANIC and underwater explorations of the Bismarck, Lusitania, and Britannic.

Ballard served in the U.S. Navy for more than 30 years, and now serves as the Founder & President of the Ocean Exploration Trust, Director of the Center for Ocean Exploration, and Professor of Oceanography at the University Of Rhode Island Graduate School Of Oceanography. He is also an Explorer-In-Residence at the National Geographic Society, Commissioner for the U.S. Commission on Ocean Policy, and a Senior Scientist Emeritus at the Woods Hole Oceanographic Institution.

The author of numerous books and articles, including his best seller, Lost Liners, Ballard has been featured in several National Geographic programs, including Secrets of the Titanic and a five-part mini-series, Alien Deep with Bob Ballard. He also served as a special advisor to Steven Spielberg on the television show, seaQuest DSV. A recipient of the National Marine Sanctuary Foundation's lifetime achievement award, Ballard’s distinctions also include 21 Honorary Doctorates and a National Endowment for the Humanities Medal. He was elected a Fellow of the American Academy of Arts and Sciences in 2014.

Part explorer, part historian, Ballard takes audiences on a fascinating journey through the past and the mysteries of the deep sea. Exemplifying and encouraging the pioneering spirit and the marvels of discovery, Ballard offers insight on leadership, ingenuity and the power in believing that anything is possible.

Bob Ballard is a great guy...but what is more important is that he is a genius with an incredible breadth of knowledge, and the very rare ability to share that knowledge with a non-scientific audience...in a casual, humorous and interesting manner which is easy for them to grasp. Philadelphia Speaker Series