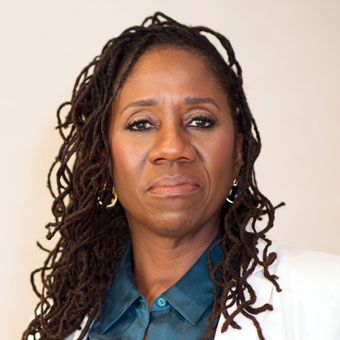 Ifill, the second woman to ever lead LDF, provided visionary and transformational leadership during one of the most consequential and intense moments in our nation’s history. She began her career as a Fellow at the American Civil Liberties Union, before joining the staff of the LDF as an Assistant Counsel in 1988, where she litigated voting rights cases for five years.

For over 20 years, Ifill taught civil procedure and constitutional law to thousands of law students at the University of Maryland School of Law in Baltimore and pioneered a series of law clinics, including one of the earliest law clinics in the country, focused on challenging legal barriers to the reentry of ex-offenders.  Ifill is also a prolific scholar who has published academic articles in leading law journals, and op-eds and commentaries in leading newspapers. Her 2007 book, On the Courthouse Lawn: Confronting the Legacy of Lynching in the 21st Century, was highly acclaimed, and is credited with laying the foundation for contemporary conversations about lynching and reconciliation.

In 2013, Ifill was invited back to the Legal Defense Fund – this time to lead the organization as its 7th Director-Counsel. In that role, Ifill increased the visibility and engagement of the organization in litigating cutting-edge and urgent civil rights issues and elevating the organization’s decades-long leadership fighting voter suppression, inequity in education, and racial discrimination in the criminal justice system. At critical moments during national political and civil rights crises, Ifill’s voice and vision have powerfully influenced our national dialogue. Ifill is a frequent public commentator on racial justice issues, known for her fact-based, richly contextualized analysis of complex racial issues. She is a trusted and valued advisor to civic and community leaders, national civil rights colleagues, and business leaders.

Among many honors, Ifill is the recipient of numerous honorary degrees, and was recently named one of TIME Magazine’s Women of the Year. In 2021, she was named one of TIME Magazine’s 100 Most Influential People in the world in 2021, one of Glamour Magazine’s Women of the Year, honored with a 2021 Spirit of Excellence Award by the American Bar Association, and named Attorney of the Year by The American Lawyer in 2020. In 2022, Ifill joined The Ford Foundation organization as a Senior Fellow and will receive the prestigious Brandeis Medal, named for Supreme Court Justice Louis D. Brandeis, and the American Bar Association’s Thurgood Marshall Award.