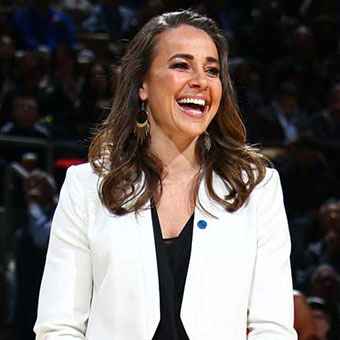 Head Coach for the Las Vegas Aces of the WNBA; Assistant Coach for the San Antonio Spurs and the NBA's First Female Full-time Coach
Fee Range $30,001 - $50,000 *
* This specific fee falls within this range. Ranges are presented as a guideline only. Speaker fees are subject to change without notice. For an exact quote, please contact your Keppler Speakers representative.
Add to Favorites

Becky Hammon reflects on her inspiring journey to deliver perspective on effective teambuilding, nurturing a ‘can-do’ attitude, and the power of strong support systems as the foundations of organizational and team success.

After an outstanding college and professional basketball career, including two Olympic appearances, Becky made history in 2014 when she became the first woman to coach full-time in the NBA when the San Antonio Spurs brought her into a leadership role as an assistant coach. In December of 2020, Becky once again made NBA history when the Spurs head coach Gregg Popovich was ejected in the second quarter of a game. Upon the ejection, he turned to Becky and said, “You got ’em."

As she describes her fascinating journey as an NBA trailblazer, Becky reveals vital leadership lessons for building credibility and respect. Considered an underdog for most of her career, Becky’s enthralling tale features her rise from undrafted rookie in the WBNA to being named one of the league’s Top 15 Players of All-Time. The WNBA legend returned to the league to become the head coach of the Las Vegas Aces in 2022.

Becky’s presentations are uniquely personal, as she shares her perspective on what it means to be the first female coach in a men’s league. As she urges participants to pursue their dreams relentlessly and to stand up for what they believe, audiences embrace her forward-looking vision and learn to see every day as a gift with innumerable possibilities.