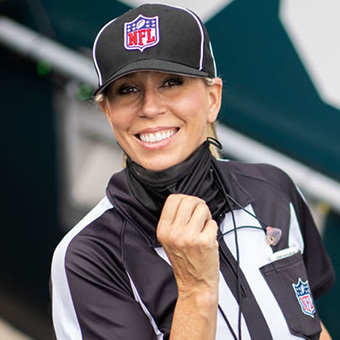 The NFL’s First Female Official; One of the Sports Illustrated 100 Most Influential NFL Figures of All Time
Fee Range $20,001 - $30,000 *
* This specific fee falls within this range. Ranges are presented as a guideline only. Speaker fees are subject to change without notice. For an exact quote, please contact your Keppler Speakers representative.
Add to Favorites

On April 8, 2015, Sarah Thomas was one of nine new game officials added to the NFL officiating roster for the 2015 season, becoming the first full-time female official in NFL history. Her history-making game happened on September 13, 2015 between Kansas City and Houston. Her hat, whistle and flag from that game are now on display at the Pro Football Hall of Fame.

A boss has the title; a leader has the people. Sarah Thomas

She began her football officiating career in 1996 when she attended a meeting for aspiring football officials with her brother, Lea. She worked 10 years in high school, doing as many pee- wee, middle school and junior varsity games as she could possibly do. In 2007, she was hired by Conference USA. This was another history-making milestone as Sarah became the first female to officiate for the NCAA’s Major College Football Bowl Division. The hard work allowed her the opportunity to work numerous bowl games, championship games, and All-Star games, giving her exposure to NFL officials who were scouting other officials.

Being hired in 2015 was only the first step. Sarah just recently completed her 6th season for the NFL as a Down Judge working with Shawn Hochuli’s crew. In early January 2019, it was announced that Sarah would make history again as the first female to officiate a postseason NFL game. Sarah worked the divisional round game between the LA Chargers and New England Patriots on January 13, 2019. And to wrap up her 2020 season, Sarah shattered the glass ceiling as she was selected to work Super Bowl LV in Tampa, FL. Making her the first female to ever work a Super Bowl and once again allowing her jersey, hat, whistle and flag to be on display at the Pro Football Hall of Fame.

Off the field, Sarah is a Marketing Specialist for Mid-South Rehab, Inc., National Speaker for Keppler Speakers Bureau and a skin care consultant for Rodan & Fields. She was born in Pascagoula, Mississippi and is a graduate of the University of Mobile, where she earned a full scholarship as a basketball player and Academic All-American honors. She has had many national recognitions on her accomplishments throughout her journey, but one is at the top of these accomplishments, being named Sports Illustrated’s 100 Most Influential NFL Figures of All Time. But nothing compares to being a mom to her three beautiful children, Bridley (20), Brady (17) and Bailey (8).

Sarah Thomas’ story is captured in the five-part documentary series Earnin’ It, which premiered on Peacock NBC in 2022 with a focus on the women in football who are opening doors and paving the way for others to follow in their footsteps. Sarah’s story also figures prominently in the wildly popular podcast of the same name, which also launched in 2022.

Sarah Thomas is a super star, just absolute star appeal and vibe- but also really down to earth and just plain nice.