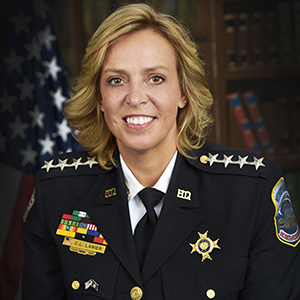 Former Chief, Metropolitan Police Department of DC; First Commanding Officer of Homeland Security and Counterterrorism, MPDC; NFL Head of Security
Fee Range $20,001 - $30,000 *
* This specific fee falls within this range. Ranges are presented as a guideline only. Speaker fees are subject to change without notice. For an exact quote, please contact your Keppler Speakers representative.
Add to Favorites

Cathy Lanier, the former chief of police for Washington, DC shares her inspiring life story – and how she overcame the odds to restore an embattled police department and community.

Despite her rocky start as a 15-year-old mother and ninth-grade dropout, Lanier advanced through the ranks to become the first female chief of the Metropolitan Police Department of the District of Colombia (MPDC). She shares her insights on revamping the work culture in her department. Her method: a razor-sharp focus on responsiveness, communications, and trust.

Cathy lays out how she restored trust in the police department among the public and gained the respect of her fellow first responders. She went on to become the First Commanding Officer of Homeland Security and Counterterrorism, MPDC and Head of Security for the National Football League.

From her experience as an expert in securing and managing large special events, Cathy shares the insights she learned on how to lead in crisis situations, while keeping an eye out for risk management. She oversaw five Presidential Inaugurations, including the 2009 Inauguration, the largest in history, as well as several special events in DC including two state funerals and two Papal visits.

Cathy is credited for transforming Washington, D.C., once known as the "murder capital of the nation" to a safer city that had faith in its police department. She enabled her officers to turn the tide on crime with better intelligence and technology. She advocates using data to guide policing; she pushed for her patrolmen to use body-worn cameras. After 10 years in the job, Cathy became one of the most popular public officials in the DC area. That honor was partly due to her stance on community policing, whereby officers build up trust from the ground level.

"She made the entire police department be responsive to people in the community. That was a dramatic change for us, but that is what makes us here in D.C. now stand out in policing."