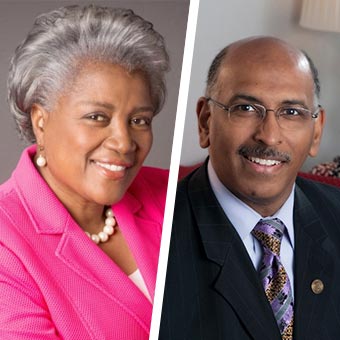 Highly Regarded Political Strategists and Washington Insiders
Fee Range $30,001 - $50,000 *
* This specific fee falls within this range. Ranges are presented as a guideline only. Speaker fees are subject to change without notice. For an exact quote, please contact your Keppler Speakers representative.
Add to Favorites

Two of Washington’s most seasoned political veterans come together with unparalleled expertise on national politics and public affairs. Using their firsthand knowledge, Donna Brazile and Michael Steele focus their discussions on Washington’s rapidly changing political drama and take audiences behind the scenes in 2020 politics.

As National Campaign Manager for Al Gore’s 2000 Presidential campaign, a Democratic Party official, and FOX News contributor, Brazile is an unquestioned expert on political strategy. She taps into her Washington circles to provide expertise often missed by outsiders and does so with a style that continues to earn her the respect of colleagues on both sides of the aisle.

Steele made history as the first African American elected to statewide office, as Lieutenant Governor of Maryland. He broke similar ground as Chairman of the RNC in 2009—under his leadership, the GOP took control of the U.S. House of Representatives in 2010. Currently serving as an MSNBC political analyst, Steele’s ties to the Washington community help him provide fresh analysis on the storylines coming out of Capitol Hill and on the campaign trail.