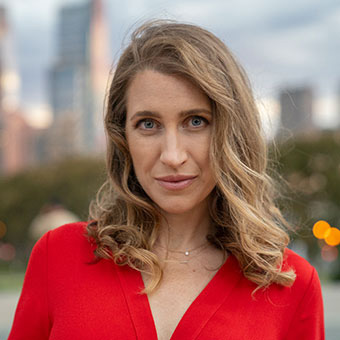 On April 15, 2013, Dr. Stavas approached the finish line of her fifth Boston marathon. Just blocks away she heard explosions, and she ran towards them.

Arriving at the scene she went to work administering CPR, applying tourniquets, and triaging the wounded.

What led her to make that fateful decision to run into a terrorist attack? An expert on chaos, Natalie Stavas attacks every obstacle with the same attitude: “You run towards that which you fear, that which challenges you, that which is oppositional.” Running toward chaos actually makes chaos more manageable.

Following these actions President Barack Obama, Katie Couric, and Anderson Cooper honored Natalie for her role as a first responder. Improper Bostonian magazine named Dr. Stavas one of “Boston’s Best" and The Boston Globe awarded her with “2013 Bostonian of the Year” - an honor bestowed upon those that shape the biggest story of the year in a remarkable way.

After the bombings Dr. Stavas increased her efforts in preventing childhood violence and improving the health of urban communities. She is a mentor for Sole Train- a non-profit organization guiding inner-city youth on a path towards their full potential through running. She is also the medical advisor for the Appalachian Mountain Club, helping improve the health of children by getting them outside.

Dr. Stavas has written for multiple outlets including the Huffington Post, the Center for Disease Control, Self Magazine and the Medical Bag. She has been featured in Runners World, The New York Times, LA Times, The Boston Globe, The New Yorker, Time and People Magazine.

Dr. Natalie Stavas is currently a physician at The Children’s Hospital of Philadelphia. Trained and educated at Harvard University, Natalie’s area of experience is in childhood trauma, decreasing youth violence and researching how we can better protect and serve high-risk children.

She was recently named the wellbeing/work-life integration specialist for the Department of Pediatrics at the Children's Hospital of Philadelphia Keep an eye out for her upcoming book, Sole to Soul, about the transformative power that running has on high-risk youth, a simple solution to the complicated problem of childhood poverty and violence.

Dr. Stavas is an inspirational speaker and has the ability to make connections with her audience. She aligns her presentation with the goals of the hiring organization and displays enthusiasm and energy during the live Q & A session.