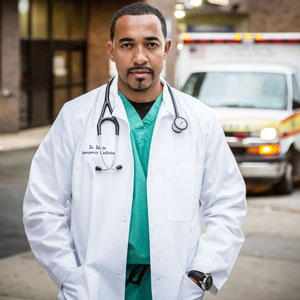 Growing up in inner-city Newark, New Jersey, Sampson Davis and two friends made a pact to “beat the street” and become doctors—and they did it.

Today, Dr. Sampson Davis is a board-certified ER physician who has appeared on numerous talk and radio shows including Oprah, CNN, The Today Show, Dr. Oz, Anderson Cooper 360, The View, Tavis Smiley and NPR. He regularly appears in print publications such as Readers Digest, O Magazine, People, The Washington Post, The New York Times, USA Today, Parade and Black Enterprise and has served as a weekly correspondent for CNN and for multiple radio programs.

Oprah dubbed the three friends “the premier role models of the world.” Dr. Davis and his fellow pact-members have written about their journey in the New York Times best-selling books The Pact (2001), We Beat the Street (2005) and The Bond (2008), and their story was made into a documentary, The Pact, available on Netflix. In 2013, Davis published Living and Dying in Brick City, an in-depth exploration of the health care crisis and medical issues facing inner-city communities. In 2018 Dr. Davis co-authored The STUFF (and started The Stuff Movement) with Sharlee Jeter. The message: that everyone has difficult moments in life, but that everyone also has “the STUFF” to overcome hardships—and not only survive but thrive.

Today Dr. Davis spends his time practicing medicine and traveling the country delivering keynote speeches with timely messages—on education, health, community, motivation, perseverance, the pact, and the STUFF. He frequently talks to students about the power of his 3 D’s: Dedication, Determination and Discipline—the necessary ingredients to anyone’s success.

In 2000, Dr. Davis was honored with the Essence Lifetime Achievement Award and named one of the 40 most inspirational African Americans in the country. In 2009, he received a BET Award. He is the youngest physician to receive the National Medical Association’s highest honor, The Scroll of Merit, and in 2021, Dr. Davis received Seton Hall University’s highest honor being named with their Most Distinguished Alumnus award, “Many Are One.”