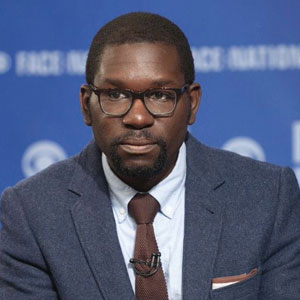 Jamelle’s political instincts provide audiences with unique insight on the past, present, and future of our national politics, policy, and the state of race relations. As he did while writing for Slate and the Daily Beast, Jamelle shares eye-opening perspectives on issues concerning the issues at play in America today.

Jamelle Bouie appears regularly on CBS’s Face the Nation. His writings have appeared in The Atlantic, The Washington Post, TIME, and The New Yorker. Jamelle uses his unique perspective to take audiences to the front lines of the nation’s most significant news events, from civil unrest to political partisanship. He has emerged as a leading voice on the national scene, being named to Forbes “30 Under 30 in Media” in 2015.

Jamelle stimulates provocative, much-needed thinking on critical national affairs issues. He helps audiences analyze current events through the lens of human history and in the age of social media. He deftly illustrates how the past reveals itself in the present, and how policy-makers, citizen activists and cultural influencers can seize the power of information to make a difference.