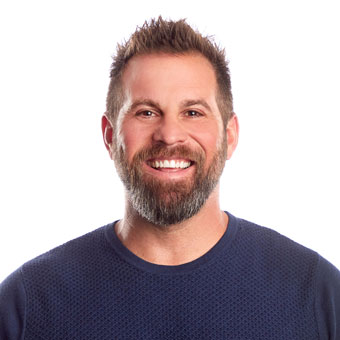 World Class Magician and 2x Pro Bowl NFL Player
Fee Range $50,001 - $75,000 *
* This specific fee falls within this range. Ranges are presented as a guideline only. Speaker fees are subject to change without notice. For an exact quote, please contact your Keppler Speakers representative.
Add to Favorites
JonDorenbos http://www.jondorenbos.com/

Retired NFL pro for the Philadelphia Eagles, Jon Dorenbos is also a world-class magician, a survivor of immense personal tragedy, an author, and a remarkably positive and powerful motivational speaker.

Jon Dorenbos played 14 seasons in the NFL, notably making the Pro Bowl twice as a member of the Philadelphia Eagles, as well as being the Ed Block Courage Award recipient and the Eagles Walter Payton Man of the Year. He also holds the record for the most consecutive games played in Philadelphia Eagles franchise history.

Jon competed on Season 11 of America’s Got Talent where he showcased his skills as a sleight-of-hand magician, making it to the finals and placing third overall amongst over 100,000 competitors. He then put his talent on display as a guest on Ellen, who quickly became one of his biggest fans and advocates. Jon appeared on Ellen more than any other guest in the history of the show. He also has been featured on HBO Real Sports more than any other guest in the history of that show as well. He retired from the NFL after he was diagnosed with a life-threatening heart condition requiring15 hours of emergency open-heart surgery.

He wrote a book titled Life Is Magic that draws a road map for how to shut that self-doubting voice up by choosing to find happiness in every situation. Producer Mike Tollin has optioned the book and is making it into a feature film. The screen play is being written by John Gatins, who was nominated for an Academy Award for Best Original Screenplay for the drama film Flight with Denzel Washington.

Dorenbos, known for his great sense of humor and positive outlook on life, is a seasoned motivational and keynote speaker with over 10 years of experience. His moving keynote presentations include the inspiring Life Is Magic, which shares its title with his bestselling book and recounts his journey from tragedy to self-discovery, offering a roadmap for how to mitigate self-doubt and choose happiness.

“Jon Dorenbos is a magical person. Life Is Magic shows how we can all choose happiness in the face of overwhelming odds, and it makes me so proud to call him a friend.”