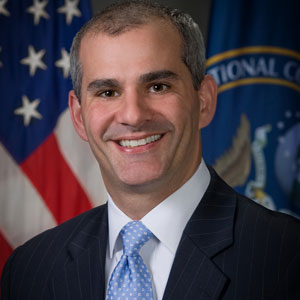 Former Director of the National Counterterrorism Center
Fee Range $10,001 - $20,000 *
* This specific fee falls within this range. Ranges are presented as a guideline only. Speaker fees are subject to change without notice. For an exact quote, please contact your Keppler Speakers representative.
Add to Favorites

During Leiter's tenure, he led the US Government's efforts to respond to repeated crises and high-stakes events including al-Qaeda's failed attempt to bring down a US airliner over Detroit on Christmas Day 2009, the tragic shooting at Fort Hood and a failed car bomb attack in Times Square. His personal reflections on being in the Situation Room during the mission that resulted in the death of Osama bin Laden are mesmerizing.

As NCTC's Director, Leiter led more than 1,000 personnel and managed an annual budget of more than $400 million. In addition, he advised the Office of Management and Budget on the allocation of more than $100 billion annually for government-wide counterterrorism activities.

Leiter shares how principled, thoughtful, visionary, and energetic leadership can carry an organization through crises that are relevant to both government and the private sector. His lessons on motivating employees and working with critical partners and customers in effecting change are as timely to organizations as combating terrorism is to the national security enterprise--and his deep insights provide invaluable understanding to both.