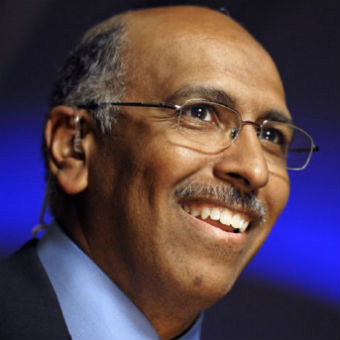 A skilled communicator and political specialist, Michael Steele surveys the political landscape and provides his unique perspective on the top headlines of the day.

As a leader in the Republican Party and someone with strong ties to the Washington community, Mr. Steele has proven himself as a speaker who offers valuable insight on the hard-hitting topics of the day and the many benefits of fostering cooperation between government and faith-based organizations to help those in need.

Sworn in as Lt. Governor of Maryland in 2003, Mr. Steele made history as the first African American elected to statewide office, breaking similar ground when named by the GOP as chairman of the RNC in 2009. Steele’s background positions him as an expert on a variety of topics, from political strategy and fund-raising, to PACs and the complexities of election reform. He is currently a Senior Advisor for the Lincoln Project, a bipartisan coalition built in opposition to Donald Trump.

In his role as chairman of the Republican National Committee, Mr. Steele revitalized the Republican Party, breaking fundraising records during the 2010 Congressional cycle to over $198 million and winning 63 Republican House seats—the biggest pickup since 1938. As a leader committed to grassroots organization, he understands the value of party building at the state and local levels and played a major role in helping produce 12 governorships and over 760 seats, the greatest share of state legislative seats since 1928.

Steele was raised a Democrat. Later in life, however, he switched parties to become a Republican—a decision he attributes to his belief in President Regan’s philosophy of self-reliance. Mr. Steele shares the strategies he used in getting things done in politics, particularly in situations involving opposing views. As Maryland’s Lt. Governor, for example, that included reforming the state's Minority Business Enterprise program, improving the quality of Maryland's public education system, championing its historic Charter School law, and expanding the state’s economic development.

Prior joining MSNBC, Mr. Steele frequently shared his point of view on programs such as Meet the Press, Face the Nation, and HBO's Real Time with Bill Maher. His writings on legal, business, and political issues have appeared in The Wall Street Journal, on websites like The Hill, Politico, BET, and Townhall. Michael Steele is also the author of two books - Right Now: A 12-Step Program for Defeating the Obama Agenda (2009) and co-author of The Recovering Politician’s Twelve Step Program to Survive Crisis (2013).

One of the nicest, most congenial guest speakers we have ever had and extraordinarily easy to work with. Mr. Steele was a pleasure. Newington Cropsey Foundation