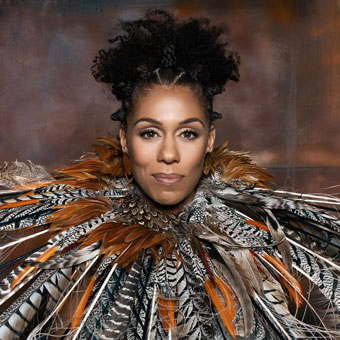 Princess of Sierra Leone, Humanitarian and Co-Founder of Sierra Leone Rising, Author of A Princess Found
Fee Range $20,001 - $30,000 *
* This specific fee falls within this range. Ranges are presented as a guideline only. Speaker fees are subject to change without notice. For an exact quote, please contact your Keppler Speakers representative.
Add to Favorites
iamprincesssc https://www.sarahculberson.com/

After discovering she was related to African royalty, Princess Sarah’s story has captured the attention of audiences around the world—a powerful message of diversity, inclusion and the transformative power of living a fearless life.

Raised in West Virginia by her adoptive white parents, Sarah Culberson had little knowledge of her ancestry. She grew up in a loving family, but she had questions about her identity and biracial heritage that led her to hire a private investigator in 2004. When she began the unforgettable journey to find her family, she never imagined what she would discover or how it would change her life.

Sarah’s biological father, Joseph Konia Kposowa, was chief of the royal family of the Mende tribe in Bumpe, Sierra Leone in West Africa. Sarah was considered a Mahaloi, with the status of a princess. Her first meeting with her father and the Mende people took place just two years after the end of Sierra Leone’s brutal, 11-year civil war. As she visited and learned more, Sarah felt driven to do something to support the rebuilding of Sierra Leone’s infrastructure and the preservation of its community and culture. Together with her biological brother, Hindo Joseph Kposowa, she founded the non-profit Sierra Leone Rising which provides clean drinking water, sanitary pads for girls, education, medical attention, public health education and supplies during the pandemic, resources to build schools and technology centers and more.

Princess Sarah’s book, A Princess Found: An American Family, an African Chiefdom, and the Daughter Who Connected Them All, is being adapted into a major motion picture for Disney Studios by award-winning filmmaker Stephanie Allain. Princess Sarah has also been honored with the prestigious Trumpet Impact Award, and her story has been profiled in media outlets around the world, including The Singapore News, Los Angeles Times, Chicago Tribune, BBC radio, NPR, Oprah and Friends radio show, Reader’s Digest, Newsweek, People and Glamour. She’s been interviewed by dozens of news outlets, including NBC, Good Morning America, CNN, and Inside Edition.

Princess Sarah’s passionate and genuine storytelling instantly captivates audiences as she tells her story of self-discovery, empowerment and transformation and shows leaders and teams how to build diverse, inclusive cultures for the future.

Princess Sarah was FANTASTIC! She was engaging, a phenomenal storyteller, and I’ve received really great feedback about her presentation.