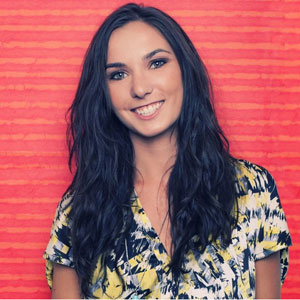 Samantha Radocchia ("Sam Rad") is a reformed gamer who started studying virtual currencies in 2009 while writing her anthropology thesis on currency exchanges in the virtual world Second Life. Since then, she has founded four companies, holds several patents, and was an early and outspoken voice in blockchain as the co-founder of Chronicled, an enterprise blockchain company focused on supply chains. Samantha consults executives, trade associations, governments and investors on emerging technology trends and is co-founder and CEO most recently of LOVE (seeyouonlove.com), a novel web3 communications platform.

A future of work expert, she also explores the future of production, community/governance, cities, finance, and sustainability—for the environment and for business. She has built experimental cities leveraging blockchain, IoT, robotics, and AI; deployed mesh sensor networks across small- and medium-sized cities; created globally distributed and decentralized organizations and helped companies shift to embrace remote work; architected a decentralized manufacturing network with connected 3D printers and knitters; deployed a drone delivery and authentication service on blockchain; assisted in the creation of a smart charging station for autonomous vehicles and more. She is also trained in and speaks on organizational culture and theory, particularly as we shift to globally distributed and remote workforces. She guest-lectures at globally recognized universities such as MIT, Columbia and UCL, and she is a futurist on the faculty of Singularity University.

The author of the best-selling Bitcoin Pizza: The No Bullshit Guide to Blockchain, Sam is also a regular contributor to Forbes, writing on the intersection of emerging tech and socio-cultural, political, and economic trends. On her Radical Next Ideas blog, she argues that “Radical Evolution” has replaced the (now outdated) Digital Transformation mindset. She was named to the 2017 Forbes 30 Under 30 List for Enterprise Technology and has been featured in a wide range of publications including Bloomberg, Fast Company, Newsweek and HuffPost. Sam speaks to and leads corporate trainings for Fortune 500 corporations, trade associations, conferences, national governments, NGOs and investment firms, educating leaders on the technologies and cultural shifts that will shape their organizations—and daily lives—in the years to come.

A mesmerizing journey through the paradigms that have shaped distributed and decentralized computing!