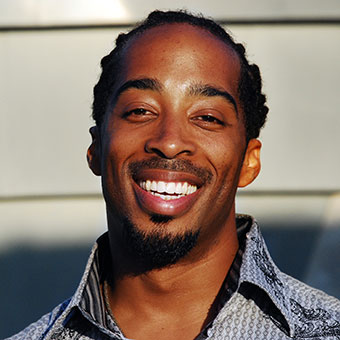 Sekou Andrews is the Founder/CEO of SekouWorld, Inc., innovator of Poetic Voice, and one of the most successful spoken word poets in the world. On any given day, this schoolteacher turned artist and entrepreneur, who built a 7-figure company on poetry, can be found keynoting at a Fortune 500 company, inspiring thousands at a concert, or performing for Barack Obama in Oprah’s backyard.

It is no surprise that Forbes has called Sekou a “polymath” and “the de facto poet laureate of corporate America.” His wow-factor is in high-demand with the world’s most successful organizations, including Google, Viacom, Toyota, Nike, Cisco, Linkedin, Capital One, L’Oreal, Global Green, Paypal, ASAE, The Gap, Paypal, General Mills, the ACLU, and the NBA to name but a few.

Sekou is a multi-talented entertainer with over 2 decades of experience inspiring audiences across platforms and genres. He has shared event stages with such heavyweights as Drake, Stevie Wonder, Jay-Z, Carlos Santana, Kendrick Lamar, Maroon 5, Jill Scott, and John Legend. He is also a voiceover artist and actor with several national commercials, three films, and an original, critically-acclaimed, two-man play on his resume. With creative partner Steve Connell, Sekou has inspired audiences from the HBO US Comedy Arts Festival to The Pasadena Pops Orchestra. Sekou has even returned to the classroom, teaching his rockstar secrets to public speakers through his highly effective Stage Might™ speaker training system that helps executives, influencers and leaders become more dynamic communicators.

With all of the innovation and inspiration that is Poetic Voice, Sekou Andrews is accomplishing the seemingly impossible – bringing spoken word poetry to the world’s largest stages, while redefining the notion of what a speaker is, and what a poet can be.