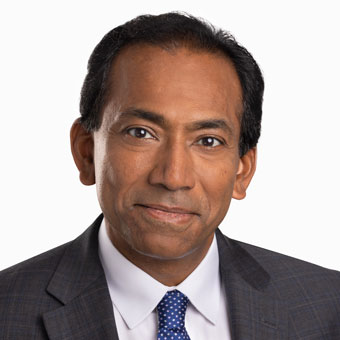 Vijay Vaitheeswaran is the global energy and climate innovation editor of The Economist. Previously he served as the Economist’s U.S. business editor and its first China bureau chief.

With a career that has taken him from Mexico City and London to Shanghai, Vaitheeswaran brings an impressive breadth and depth of expertise to topics ranging from globalization, politics and economics to international trade, supply chain and labor disruptions. His years in China inform his deeply qualified perspective on Asia’s role in the global economy and on China’s dynamic private sector. He is widely regarded as an expert on China’s impact on international markets and its emergence as an economic superpower. He also led the editorial team that launched the “Global Business Review,” a highly successful app and the first bilingual product in The Economist’s 175-year history.

In his latest key role at the Economist, Vijay covers the energy and utility industries, the clean energy transition, climate innovations and low carbon technologies. He delivers an incisive perspective on America’s climate and green infrastructure efforts and keeps a watchful eye on ESG trends and corporate pledges of net-zero emissions for signs of promise as well as greenwashing.

Vijay is a Life Member of America’s Council on Foreign Relations and an advisor on sustainability and innovation to the World Economic Forum at Davos. His opinion pieces have appeared in leading publications including the Wall Street Journal, the Financial Times, the New York Times and Foreign Policy, and he appears frequently on CNBC, Bloomberg, MSNBC, BBC and NPR. He has addressed groups ranging from the U.S. National Governors Association and the UN General Assembly to the TED and Aspen Ideas conferences. He also serves as chairman of a provocative series of Innovation Summits organized by The Economist, held annually in Chicago, Hong Kong and London.

According to the Financial Times, Vaitheeswaran is “a writer to whom it is worth paying attention.” He is the author of three highly regarded books, the most recent of which was Need, Speed and Greed: How the New Rules of Innovation Can Transform Businesses, Propel Nations to Greatness, and Tame the World’s Most Wicked Problems, which Kirkus declared “a perfect primer for the post-industrial age.” His previous books include Power to the People: How the Coming Energy Revolution Will Transform an Industry, Change Our Lives, and Maybe Even Save the Planet, and Zoom: The Global Race to Fuel the Car of the Future. Most recently, Vaitheeswaran was the author of The World is Not Flat, a special report published by The Economist on the disruptive future for globalization, multinational firms and supply chains.