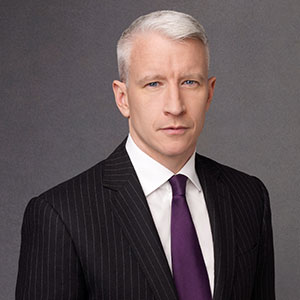 Anderson Cooper takes audiences inside the news of the day, sharing sometimes provocative yet always eye-opening insights on the stories impacting people and issues around the world.

As the anchor of the Emmy-winning CNN news program Anderson Cooper 360°, he brings the most pressing stories of the day to a worldwide audience from multiple perspectives. In addition to his role as a correspondent for CBS News’ 60 Minutes, Anderson is widely respected for his courageous on-the-scene reporting of breaking and oftentimes tumultuous news events at home and abroad, including Hurricane Katrina, the Egyptian Revolution and the Haitian earthquake catastrophe. Through election cycles, he has become a highly-sought debate moderator, praised most recently for his sharp, even-handed questioning yet assertive fact-checking of 2016’s presidential candidates.

On stage, Anderson brings warmth, humor and relatability to his role as a premiere broadcast journalist as he shares insights on American politics, culture and the oft-overlooked stories that matter to citizens. Drawing on his experience covering news in Russia, Haiti, Rwanda, Somalia, the Balkans, and the Middle East, he also brings audiences an experienced and comprehensive perspective on international affairs and the challenges that we face in a rapidly changing world.

Anderson did a great job! University of Arkansas--Fayetteville