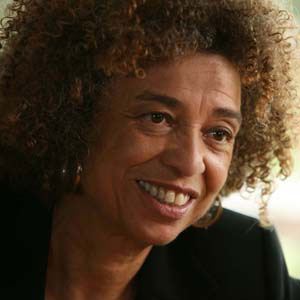 Iconic activist Angela Davis has made it her mission to share her life story and challenge her audiences to join the struggle for racial, economic, and gender justice.

Angela has been deeply involved in some of the major social movements over the last 50 years. She was born and raised in Birmingham, Ala., by parents who were active community organizers. As a teenager, she marched and picketed against racial segregation. Angela went on earn a doctorate in philosophy. She became known as a radical feminist and activist, a member of the Communist Party USA, and an associate of the Black Panther Party.

Angela’s outspoken ways made her a focal point of criticism. Her Communist ties led then-California Governor Ronald Reagan in 1969 to try to bar her from teaching at any California university. The attempt failed; she is now professor emerita at the University of California, Santa Cruz, in its History of Consciousness Department.

Angela became the center of a firestorm in the 70s, when she was prosecuted for three capital felonies, including conspiracy to murder, but was acquitted. The charges stemmed from Angela’s purchase of weapons for her personal bodyguards; these guards in turn used the guns for a hostage takeover of a California courtroom. Four people were killed in the ensuing gunfight. Angela became a fugitive and was listed on the FBI's Ten Most Wanted Fugitive List.

During the 1980s, she was twice a candidate for Vice President with the Communist Party. She left the party in 1991.

Angela has campaigned for social justice – particularly with what she calls the “prison industrial complex” that has grown since the 80s with the emergence of the private-prison industry. She is one of the founders of Critical Resistance, a national grassroots organization fighting for changes in the prison system. Her books include Are Prisons Obsolete, Abolition Democracy: Beyond Prison, Torture, Empire, Abolition. Feminism. Now. (2022) and Angela Davis: An Autobiography (2022).

Angela writes and frequently speaks as part of her mission to build engaged communities that seek to reform the U.S. prison system. She urges her audience to “hone their critical skills, develop them and implement them" while fighting for racial, economic and gender justice.

Professor Angela Davis was an absolutely wonderful, fantastic, incredible speaker. She was very humble and open, and everyone who had the opportunity to interact with her only had positive things to say about Ms. Davis. University of Chicago