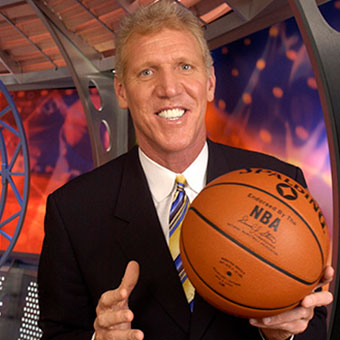 Basketball Legend, ESPN Broadcaster, Humanitarian & Survivor
Fee Range $30,001 - $50,000 *
* This specific fee falls within this range. Ranges are presented as a guideline only. Speaker fees are subject to change without notice. For an exact quote, please contact your Keppler Speakers representative.
Add to Favorites
BillWalton

A basketball superstar and member of the Basketball Hall of Fame, Bill Walton made sports history playing for UCLA when he led the team to two NCAA championships and a record 88-game winning streak. Walton played under the famed tutelage of John Wooden, who coached "character" and "giving your best" first and before winning—lessons that guided Walton throughout his career.

Following a celebrated college basketball career, Walton went on to have a Hall of Fame NBA career, playing on two championship teams—the Portland Trail Blazers and the Boston Celtics—and earning numerous honors and awards, including citations for his humanitarian and leadership contributors. After basketball, Walton pursued his dream job as a sports broadcaster, but first had to overcome his lifelong stuttering affliction. Then in 2008, Walton endured risky back surgery to repair damage done early in his basketball career—through it all, Walton’s determination carried him through.

Now an Emmy Award-winning basketball analyst, Walton has appeared on a range of television networks including CBS Sports, NBC, ABC, ESPN, FOX and MSNBC, and has contributed to major events including the 1996 Atlanta and 2000 Sydney Summer Olympic Games. In 2009 he was named one of the top 50 sports broadcasters of all time by the American Sportscasters Association.

The author of Nothing But Net, Walton's memoir, Back from the Dead reveals his inspiring story of a sports and cultural icon through devastating injuries and amazing recoveries.

Expertly merging comic narratives with valuable lessons on leadership and practical steps toward defining and achieving one’s own version of success, Walton inspires audiences to reach their goals through dedication, perseverance, flexibility and teamwork.

…thank you so much for telling your amazing story and combining it with our dealers. You were the highlight of the meeting and everyone has told me what an amazing person you are and your stage presence was flawless without notes and from the heart. The fact that you are legend was trumped by your kindness and compassion as a person. I have spent a lot of time around professional athletics and no one have I met that’s as nice as you.