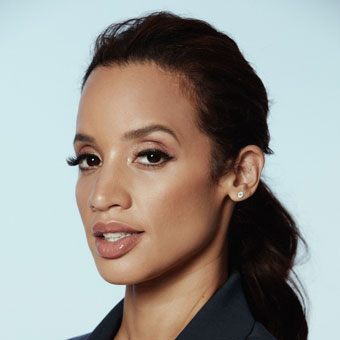 Celebrated Actress from Orange is the New Black and American Crime Story: Versace
Fee Range $50,001 - $75,000 *
* This specific fee falls within this range. Ranges are presented as a guideline only. Speaker fees are subject to change without notice. For an exact quote, please contact your Keppler Speakers representative.
Add to Favorites
SheIsDash

Dascha Polanco is well-known for her groundbreaking roles in Hollywood as a leading young Latina actress. Polanco is recognized for her role as “Dayanara Diaz” on the hit Netflix original series, Orange is the New Black.

She also appears as “Lori,” a recurring character in the FX series American Crime Story: Versace. Polanco co-starred in the Golden Globe-nominated 20th Century Fox film, Joy, and she appeared in The Perfect Match (2016). Other roles include the indie dark comedy iGilbert and Cobbler with Adam Sandler (2015). She made her debut opposite Vanessa Hudgens and Rosario Dawson in Gimme Shelter. And her next project is Martin Scorsese’s, The Irishman.

Born in the Dominican Republic and raised in Brooklyn by way of Miami, Polanco is the eldest daughter of a mechanic and a cosmetologist. Polanco’s personal story of losing her mother, becoming a single teen mom, and struggling with self- confidence has captivated the hearts of the public. She continues to use her influential platform to help others in need, promoting and flourishing her mission of “Self Lovery.” Polanco first received her big break in Orange is the New Black while attending clinicals for nursing at LIU and working as a Central Sterile/OR Manager in two New York City hospitals.

Since then, in addition to numerous film and TV roles, Polanco has been featured as the face of Old Navy’s national Spanish commercial campaign. Last year, she became part of the NFL's 2015/2016 Women’s Apparel campaign, representing the New York Giants and the Latino community. Her achievements have been recognized by numerous awards, including the ALMA Awards, HOLA Awards, and The National Association of Latino Independent Producers (Lupe Award). Huffington Post recognized her as one of the Latinas to be "Breaking The Mold,” and The Hollywood Reporter named her one of the 40 Young Latino Powerhouses in Hollywood. Dascha also enjoys spending her time traveling the world, completing missions to help children in need, such as her most recent trip to Haiti. She is on the Board of Directors for the Starfish Foundation, which provides financial support to hardworking young women in need of the resources necessary to succeed. In addition, she has partnered up with the DREAM Project Foundation in the Dominican Republic to open up a theater and arts programs for children in the country.