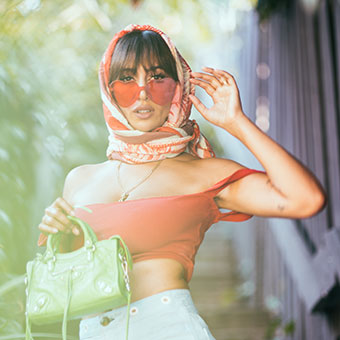 Cruz, a three-time SAG Award winner, was named one of the "Top Latino Powerhouses under 40" by The Hollywood Reporter in 2013, joining such distinguished names as Eva Longoria, Selena Gomez, and Demi Lovato. Cruz was also included on Latina Magazine’s 30 Under 30 List in 2015. Jackie is also widely influential online with 99,000 Twitter followers.

Jackie has inspired college students around the country with her story of resilience. Born in New York City, Cruz spent her childhood shuttling between New York, LA, the Dominican Republic, and Miami. She draws from the strength that allowed her to survive a near fatal car accident. Overcoming brain surgery, a coma, and collapsed lung, Cruz remained determined to achieve her dream of becoming a musician.

Now a popular singer and songwriter, Cruz’s music career continues to evolve. Through her music and acting she hopes to continue creating better pathways within the entertainment industry for people of Hispanic background. Jackie’s voice is helping pave the way for the Latina community in the entertainment industry, promoting the inclusion of all women. She breaks down gender-driven barriers to create/produce her own opportunities, including her own production company. Jackie has discovered the importance of inclusion and uses her platform to send a message that more Latinas need recognition and opportunities in Hollywood.

She was an amazing speaker. Everyone who attended thoroughly enjoyed the event! Northeastern University