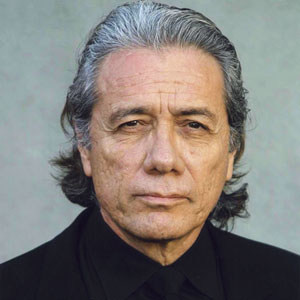 Actor, Producer, Director, and Latino Community Activist
Fee Range $30,001 - $50,000 *
* This specific fee falls within this range. Ranges are presented as a guideline only. Speaker fees are subject to change without notice. For an exact quote, please contact your Keppler Speakers representative.
Add to Favorites
edwardjolmos http://www.edwardjamesolmos.com/

Edward James Olmos imparts a lively message about the ideals of cultural diversity and racial harmony that inspire you to fight for the causes in which you believe.

Named America’s most influential Latino star by Hispanic Magazine, Edward is an actor, director and passionate community activist best known for his roles in the film Stand and Deliver and television’s Battlestar Galactica.

For more than two decades, Edward has advocated tirelessly for Latino and Latina communities, but his efforts for social justice transcend racial lines. On stage, he draws from his experiences onscreen and on the frontlines of social activism to encourage others to discover the role that best suits their passion and objective. Take away a renewed appreciation for community involvement and working together to create a better society.

Mr. Olmos went out of his way to help craft the presentation... [by working] together with the co-chairs and our staff. He was the right man at the right time...[and] an absolute pleasure to work with. Hopelink