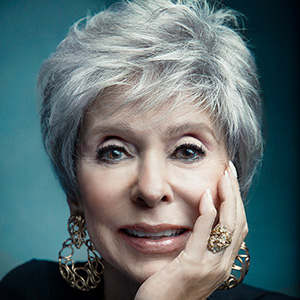 Rita Moreno remains one of the busiest stars in show business. Rita recently starred in the critically-acclaimed Latino remake of Norman Lear’s classic sitcom, One Day at a Time on Netflix. Prior to that, Rita has also appeared in guest-starring roles in primetime TV series such as Getting On, Jane The Virgin, Grey’s Anatomy, and Grace and Frankie.

In 2015 Rita received the Kennedy Center Honor for her lifetime Contributions to American culture. She served as the Grand Marshal of the National Puerto Rican Day Parade in New York City and released her ‘first ever’ all Spanish language album, Una Vez Más. Rita lends her voice to animated characters in productions like Nina’s World and the film, Rio 2. Her first book, Rita Moreno: A Memoir instantly became a New York Times Bestseller.

Rita belongs to an elite group of only 12 living performers who have won entertainment’s grand slam of the industry's most prestigious awards: The Oscar, The Emmy, The Tony, and The Grammy. Her Oscar came in 1962 for playing the Latina spitfire, Anita in West Side Story.