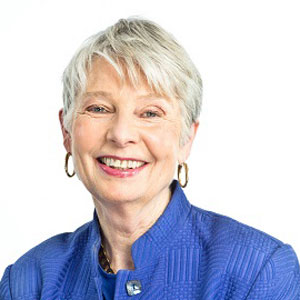 Washington Correspondent for The Daily Beast, MSNBC Contributor & Panelist on The McLaughlin Group
Fee Range $10,000 and Below *
* This specific fee falls within this range. Ranges are presented as a guideline only. Speaker fees are subject to change without notice. For an exact quote, please contact your Keppler Speakers representative.
Add to Favorites
EleanorClift http://www.eleanorclift.com/

A Washington correspondent for The Daily Beast, Eleanor Clift is one of the nation’s preeminent political analysts, delivering an insider's view of the legislative and political landscape. Clift guides audiences through the corridors of power with a candid, entertaining, and informative overview of what's happening in the nation's capital. She is also a regular panelist on the syndicated talk show, The McLaughlin Group.

Previously, Clift worked for Newsweek, where she was a key member of the magazine’s election team and one of the reporters who contributed to Newsweek's bestselling book on the 2008 campaign, A Long Time Coming. After Newsweek merged with The Daily Beast, Clift wrote for both publications. Her cover story about the television show, Mad Men, won acclaim for expertly capturing the era when women were relegated to the secretarial pool.

Clift has authored or co-authored several books, including War Without Bloodshed: The Art of Politics, a road map through the byways of the Washington that teachers don't teach in civics classes, and Madam President: Shattering the Last Glass Ceiling, which examines the potential for a woman president. Clift's Founding Sisters chronicles the suffrage struggle for women and accompanied the HBO movie, Iron Jawed Angels starring Hilary Swank and Angelica Houston. Her latest book, Selecting a President, serves as a guide for how the political system works.

Playing herself, Clift has appeared in several films, including Independence Day, Rising Sun, Murder at 1600 Pennsylvania, and Dave, as well as the CBS series, Murphy Brown.

With an insider's view of the legislative and political landscape, Clift guides audiences through the corridors of power as she provides a candid, entertaining and informative overview of what's happening in the nation's capital and the issues of the day.

You were a real hit at our National conference. Our members appreciated your straightforward analysis of the current political scene. American Public Power Association