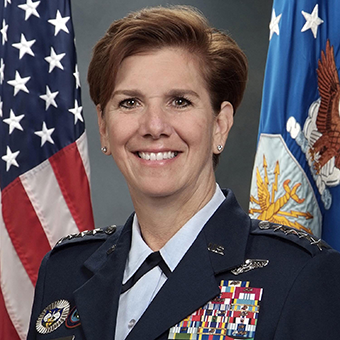 The most senior military woman ever to serve in the U.S. Department of Defense, four-star General Lori Robinson speaks on leadership, overcoming obstacles, and the most pressing U.S. national security issues today.

I’ve been privileged to be the first at many things. I’m a general, a commander, an airman. And I happen to be a woman. General Lori Robinson (Ret.)

General Lori Robinson was the first woman to be nominated and confirmed as a combatant commander. She retired in 2018 having served as Commander, North American Aerospace Defense Command (NORAD) and Commander, U.S. Northern Command (NORTHCOM). In that role, she led the soldiers, sailors, airmen, Marines, Coast Guardsmen and civilians from the U.S. and Canada responsible for homeland defense. Reporting to the President of the United States and the Prime Minister of Canada, she was also responsible for early warning and engagement of air and space threats to the United States and Canada, including ballistic missile threats from North Korea.

Prior to her command of NORAD and U.S. NORTHCOM, General Robinson was the first woman to command multiple and diverse combat forces as the Commander, United States Pacific Air Forces, maintaining the freedom of navigation in international airspace which covers 52% of the globe.

General Robinson served in many other senior leadership positions and again, was often the first woman to do so. Her entire career demonstrates remarkable achievements at the highest levels of war fighting operations, diplomatic engagement, and political coordination.

With audiences, General Robinson shares her personal leadership principles, she considers the unique challenges of being a woman in a world dominated by men and offers her insider’s perspective and insights on national security issues and geo-political trends.

General Robinson is a nonresident senior fellow in the Center for Security, Strategy and Technology at Brookings and the Belfer Center. In 2016, she was named one of TIME Magazine’s “100 Most Influential People,” and in 2017, she appeared on the magazine’s cover when she was named one of TIME’s 46 “Women Who Are Changing the World” as part of the TIME “Firsts” project.